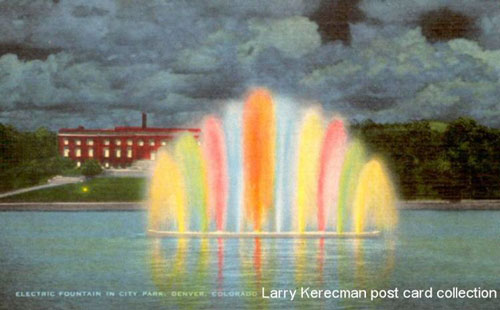 Years ago, I was contacted by a client in New Orleans to look at renovating a historic fountain in West End Park on Lake Pontchartrain. The fountain was built in 1915 by Frederic Darlington and to my knowledge is only one of two still in existence in its original form. I had crossed paths with a Darlington fountain when I first joined EDAW in Ft. Collins; the fountain was located in Denver’s City Park and I had an opportunity to see the existing fountain first hand and got to understand how advanced it was for it’s time. The Denver fountain was built in 1908 and was automated with changing water displays and colored lighting. While we did not get to complete the renovation of that fountain, it did expose me to the name of Darlington, and at the time there was precious little information available about him to be found on the internet or otherwise. The Denver fountain has since been renovated and information concerning that work can be found at www.denverelectricfountain.org

After I visited the fountain in New Orleans I again set out to learn a little more about the designer and found that there was much more information available about his work and similar fountains of the time. Darlington’s fountains were called Electric Fountains or Prismatic Fountains but when researching them I found reference to many electric fountains in the United States and beyond that I could not attribute to Darlington. I luckily stumbled across Google Books, a project where out of copyright books are scanned by various partners – including many university libraries – and are posted on the net for viewing. The research was tedious, but I started sorting out two names that were prominent in the design and development of these types of fountains around the turn of the century – that is the last century or 1900.

Electric fountains were so named not because of the use of electricity to run them but the use of electricity to illuminate them. Many of the first of these fountains were designed to run the water off of city mains and flushed all of the water through the fountain basin after one use. In later years, pumps were used to recirculate the water. The novel part of the fountains were the color changing lights that at the time were an amazing sight to a society used to dim gas lamps for lighting of streets and candles and oil lamps for general illumination.

The first electric fountain was built in the United States in 1886 at an amusement park on Staten Island and was subsequently moved to Lincoln Park in Chicago. The engineer responsible for the design of the fountain was Luther Stieringer. Luther Stieringer was an assistant to Thomas Edison and was responsible for the first use of lighting for architectural purposes and was the chief engineer of the Colombian Exposition in Chicago of 1894. There were two electric fountains at the Chicago Exposition that drew large crowds for the shows that lasted about an hour. Mr. Stieringer went on to design similar fountains at numerous expositions around the United States and was considered the first Illumination Engineer. In later years, the General Electric company continued to design fountains using electric pumps and lighting.

At the same time that Luther Stieringer was active in designing fountains, Frederic Darlington became known for designing and advancing the art of electric fountain design. Darlington was best known for his work in electrifying steam and horse drawn trolleys for interurban use. He wrote many papers on the subject during his life. Interestingly, Darlington worked for Westinghouse at the same time Stieringer worked for Edison and it is unknown if Darlington’s foray into electric fountains was in direct competition for the same work. One of the interesting facts of Darlington’s work with fountains and electric trains was the location of many of his fountains at the end of train lines. This may have been a result of the relocation of the Staten Island fountain to Chicago that was relocated by Charles Yerkes at the end of one of his trolley lines.

Darlington’s fountains were found at Schenley Park in Pittsburgh (1893), Willow Grove in Philadelphia (1896), Prospect Park in Brooklyn (1897), Crystal Palace in London (1899), City Park in Denver (1908), Wilson Park in Salem, OR (1912), West End Park in New Orleans (1915) and Garfield Park in Indianapolis (1916). Another fountain attributed to Darlington in Mexico City is mentioned in some articles, but I could not find any further information on it. Darlington established the Electric Fountain Company in Philadelphia during this time and fabricated many of the display jets and appuratus that were used to operate the fountains.

As it turns out, the association of lighting and fountains has other interesting ties, but more on that later…